I resolved a few months ago to put my money where my mouth is, or rather put my mouth where my blog-tification was, and try out my theory about how we might make progress on the cell-phone scourge in our theatres.  So, before each performance of Mary Zimmerman’s The Arabian Nights, produced recently under my direction at the university where I work, I gave the speech I had previously said that I wanted to give.

As a rule we had been using signs at the auditorium entrance and a pre-recorded announcement before the opening curtain, and sometimes asking ushers to remind patrons as they presented their tickets and received their programs to remember turn off their mobile phones.  These had proven maddeningly ineffective as we observed a few audience members using smart phones with their blindingly bright screens in the middle of most performances, and we got complaints about this every time we took an audience survey at our Mainstage shows.

For The Arabian Nights my assistant director, who was also serving as house manager, was more diligent than ever about urging the ushers to remind every single patron to turn off their phones.  They apparently did this very reliably, but I noticed two things as I overheard their interactions with arriving patrons.  First, most of the student ushers seemed sheepish, as if tacitly apologizing for the request they were making; perhaps without realizing it they felt worried about coming off as bossy or un-cool with their peers and/or impertinent or disrespectful of their elders.  Also, upon reflection, I concluded that we were not requesting the right thing: when we asked audience members to turn off their phones as they arrived, they may have been thinking, “I’ll put it on silent mode,” or even “I’ll turn it off for now,” but what we really want is for them to leave their phones off and in their pockets–not just silenced but with the screens dark–until intermission and again until after the final curtain.

We didn’t use the cards described in my previous post on this topic.  We draw a substantial part of our audience from our Theatre Appreciation course as all of the students in the class are required to attend, and one colleague that had taught several sections worried that this strategy might backfire if some of the most resentful and impudent students decided to make a sport of collecting and showing off the cards.  So we tried out one experimental strategy at a time.

I continued to worry about latecomers that missed the curtain speech, but we took no extraordinary measures to ensure their compliance.  Each of them was personally reminded by the house manager to turn off their phones before entering the theatre, but they were not otherwise lectured, frisked, nor detained.

Thus, the main innovation was the pre-show speech, which I delivered personally each and every night.  I believed it would be more effective if perceived as extemporaneous, so its exact content varied a bit from night to night, but when I was most on my game it went approximately like this:

Good evening!  I’m Scott Shattuck and I directed the play you’re about to see.  I wanted to take a moment to welcome you and thank you for coming, and to say that we hope you enjoy the show.  We love all the feedback we get from audiences that seem to love our productions, but we also get one persistent complaint from the great majority of our patrons–about the very few theatregoers that use their mobile phones while the performance is in progress.  You might not think that just pulling out your phone briefly to see who sent you a message or even to check the time would bother anyone, but our audiences tell us that it really does: they’re distracted and disturbed by the bright screens on the phones we all use nowadays.  They also tell us that they’re annoyed by a ringing phone, of course, but also even the buzzing of a vibrating phone, I so I invite you now to power your phone all the way down [at this point I pulled out my iPhone 6 and actually did so] so it won’t light up or make any sound at all.

In addition to being polite to those around you in the audience, I want to ask that you respect the efforts of the performers on our stage tonight.  They can see and hear you, and they’ve worked literally hundreds of hours over many weeks to make this performance absolutely as good as it can possibly be for you.  When they’re giving their all up here and they look out and see someone looking down at a phone instead of at them, it hurts their feelings.

And it’s the the fact that they do see and hear you, that you’re communicating with them as they perform for you, that makes live theatre a unique experience.  I know it’s the most natural thing in the world now just to grab your phone and glance at the screen almost anywhere, and–believe me–I’m just as addicted to mine as any of you are to yours.  But I think this needs become perhaps the last screen-free place in our world.  It’s the two-way process of you giving your full attention to the actors as they give their full energy and concentration to you that makes this a such a special space.

So, please, just for the next hour-and-a-quarter until intermission, and then again for the forty-five minutes of the second act, leave you phone off.  We’ll make it worth your while.  We really do want you to enjoy the show, but we need you to play your part as well, so instead of inviting you to “lean back and relax,” instead I ask you to “lean forward and engage” with The Arabian Nights.  Thank you!

Yes, it was that long.  And yes, it was that blunt (although I tried to sound friendly and welcoming, as well as sincere, as I said it).  Oh, and that last part?  I totally stole that from the curtain speech I heard at Michael Halberstam’s miraculous Writers Theatre in Glencoe, Illinois (a lovely suburb right outside Chicago). 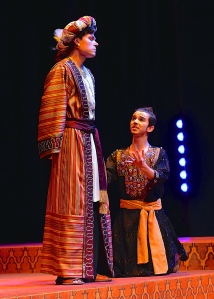 And here’s the thing: It completely worked.  Over the course of five performances, we had just a couple of phones ring momentarily in the second act, but both were silenced promptly (we did use a recorded announcement to remind our patrons before the the show resumed, but apparently a couple of people still didn’t get their phones turned off again by the end of intermission).  And not a single person in an audience that numbered more than 1,000 over five performances was seen to turn on a smart-phone screen to check messages, Facebook, e-mail, or even the time.  As far as I know, this had not happened at five consecutive performances in our Mainstage theatre in years.

A couple of Theatre Appreciation instructors responded to my request for their assessment, and both expressed belief that the speech had done the trick (I had not found or made time to speak to any of their classes, I’m afraid).  Several audience members, some well known to me and some I had never met before, approached me after performances to offer support for the effort.  (And, by the way, the show went marvelously, with bigger houses and more enthusiastic crowds than I had dared to hope for.)

So, is this the secret?  I certainly hope so.  And I am happy to share the idea and the details of implementation freely and joyfully.  I hope that other educational theatres at all levels, community theatres, and professional companies–even those on Broadway, where as a theatergoer I can attest first-hand that these devices (no matter how handy elsewhere) are a blight on our artistic discipline–will make use of our experience.  Please consider enlisting your audience’s help in this or whatever way will work best with them, spread the word as widely as you please, and join me in thanking Patti LuPone, Bill Hoffman, Michael Halberstam, and everyone else that has made an inspirational effort to engage audiences intentionally and effectively in the elimination of theatre-killing distractions in our venues.